The most of the time since July has been driving around with friends and weddings.
During these trips I have trouble with the fuel.
When investigating that I found out that the gas tank was much dirt in most rust I thought.
I empty the tank and dismounted, cleaned with heat water and high pressure after that I
Poured in acid and washed with water. After drying it was time to pour in a can of Hirsch Tank Sealer
A couple of times and let that dry for three days. Mounting it all in place with a small filter in the bottom also. I have also welded a bottom screw for empty the tank in the future.
Then I tried to start I was forced to pump the gas pump by hand when mounting it all in place again I succeed to crack one ear that holds the pump. After some days I managed to by a NOS part.
I also switch the cork in the glass bowl after that I discovered that was also leaking air.
Now is the car running again? When driving around it I got a scrambling which disappeared when depressing the clutch. I dismounted the gearbox and the clutch and discovered that the nuts had loosen it was only to draw them tight again and mount all back in place.
The good news is that Ray Pfiorini sold two of his hubcaps for Willys8 to me .Thank You Ray.
The other big news is that I have sold my Whippet 1928. 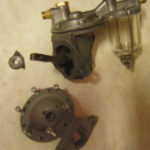 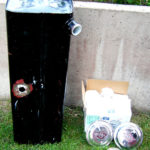 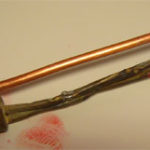 Hi everybody that is enjoying my job on this project. I hope that you not have been disappointed when visiting this site and seen that I have not written anything during July.
When Kjell visited me in May he took some photos of me and my car. He also took a trip to Sören and looked on hiscar.
There has been many mails to WOKR members trying to get information regarding the front axel. I have also got some help from everyone that answered. That ha give me a solution to the front axel adventure .I have disabled the axel into some parts that would got to be sandblasted and the parts that I have cleaned myself.
All the hydraulic shock eliminators has been cleaned and is ready for new oil and paint. The transmission mounted but there is one part missing. The flywheel house cover with axel machined and pedals with new made bushings. All has been cleaned and ready for paint.
The front window is dismounted in all it parts remounted ready for paint and glass. The petrol tank is in progress with a helping hand from a workshop and then I made the sides and mounted the tank filler neck .The gas gauge is not yet installed. The rear trunk luggage rack is fitted in place When working with the rack I discovered that the rear bumper is missing anyone that have measures 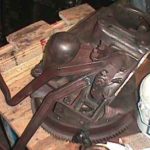 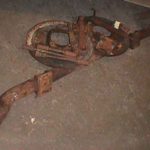 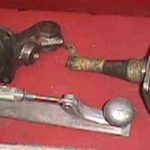 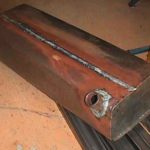 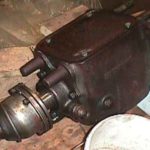 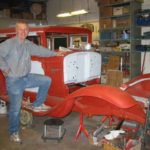 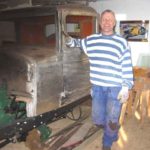 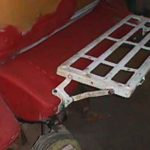 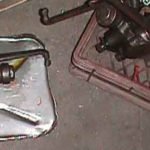 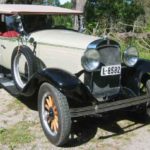