Just now the project is going with high speed.
The body has been removed from the frame. The body is put on a wagon that is drawn to the paint shop. The frame is painted black. Some of wood interior has been removed.
The brake cables is tested and the wire has been pressed in the ends. The front cables is mounted in place.The front brakes is ready.
The wood graining is finished and the parts is ready to get a layer of varnish to get a god surface before I mount it in the car.
The rear wheels is new tubes mounted so I could use the old tires when working on the frame.
The engine is mounted in the frame so is also the clutch and the gearbox. I have made new rubber mountings.
The steering is mounted to the front axel. 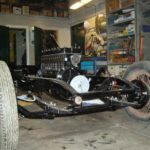 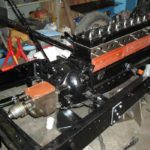 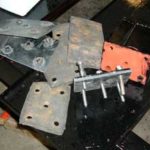 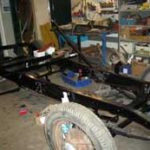 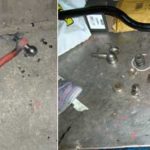 This year began with the job that I have worked with in December that means much time is spend doing the surface ready for painting. Which is to look after small dents and other small mistakes working with light from the side to the surface. That means the rear plates and the right side has been apart and welded some bolt holes and correcting the mounting so it all fit proper together .The hood shelves (plates under the hood) has been corrected so they will fit better now. The left rear door has been adjusted so it will work better when closing it.
The shock absorbers is ready. They have all been mounted and painted black. Next step there is to fit in to the frame and the axels with new rubber inserted in the link tubes.
The other big work this month has been to make the trimmings for the running boards. It began with taken the old ones-I had some fragments! Measuring it all angles and so on. I made a tool and after much trying. Several hours later it looked alright. I would buy a rectangular aluminum plate with 6mm height and about 20mm width this will be mounted on the upper side and fastened with pin bolts from the bottom.
I have not heard anything from the shop that would help me with the crack on the cylinder head. 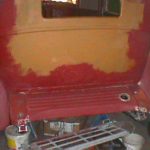 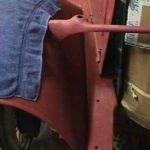 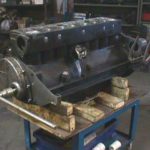 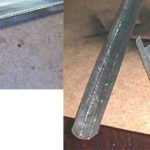 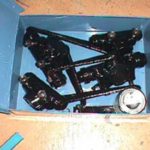 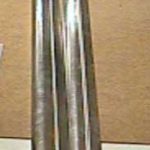 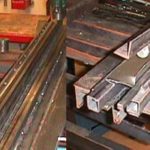 The year 2004 began with plastic filling the surface at rear doors. Then proceed with an layer of primer. The next step was too go further and do the same work at the rear fenders and the left front fender. That work was finished with a layer of primer.
The most exiting moment this month was when I went to the shop to collect the engine. The work that had been done is drilling the cylinders to 0.030 oversize pistons, new wrist pin bushings in the connecting rods, new valve guides for the valves that has been machined, new seats is machined to all valves both out and intake, one new cylinder sleeve to number seven cylinder and at last the hole block was machined to level . When examine the top I found out that the was an crack by the thermostat house and it was sent away to a shop to be welded and level it all to fit the engine.
After the engine come into the garage I cleaned all the threads. When that was finished I cleaned the hole engine and laid oil to all surfaces to protect it .All small items is cleaned and put in a pot of diesel
I has also began to measurer to the instrument panel and found out that was a possibility to use new instruments that would rebuild to fit in proper. BUT it would be nicer to have similar to the original. 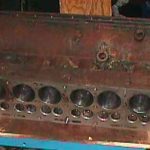 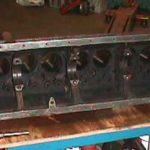 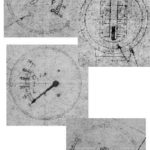 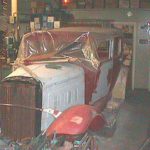 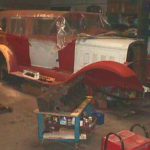