Went on making the bezels for the instrument panel. I started with making many test bending in copper because of it is much easier to chromate them later. After thinking and making a toll to press the bezel in the middle I got an idea of making it all in iron and then polish and hand them over to a shop for chroming. I decided to do so because I should only make one of each bezel. First I cut a 6x6mm long bar then I bended it with hammer so it would have the right inside measure .Then I made one fourth end ,the short end and welded it place. I finished with filing and sanding so the would fit in the panel. This was the procedure for all three. It all ended up with polish it all to be chromed. It is nearly the same measure like the original.
I also made the button from the steering wheel I turned it from an bakelite round piece .I thanks John Stokes for his concern sending me a photo of the steering wheel from there I could make somewhat similar button.
To the water temperature instrument I made a new scale look better out when mounting in the instrument.
The thermostat issue I tried to solve in an various of ways. I was talking to my brother he said:-“Try a VW thermostat”. I did so and it is somewhat smaller but is works. It looks like it moves in the same way and in the same length. I have got many figures and ideas from Lloyd Gauerke so I could compare his information with what I tested .I have not tried it in the car yet.
The shock absorbers is just now undertaken a big dismantling one is only to fill with new oil the others need more job. The fourth is rusted and stuck I needed to crack one piston.
The hood had shown some mysterious spots. It was rust! I decided to sand it to bare metal and after that some acid that get down to the small spots and removed the oxide. 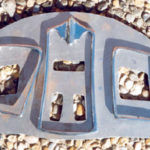 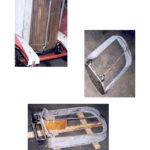 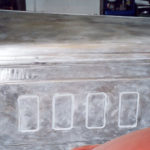